Most of my Holy Week was spent at this table! 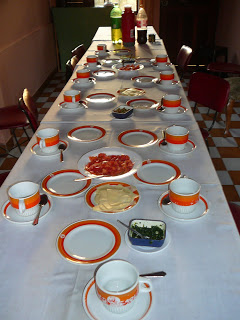 And with these people! 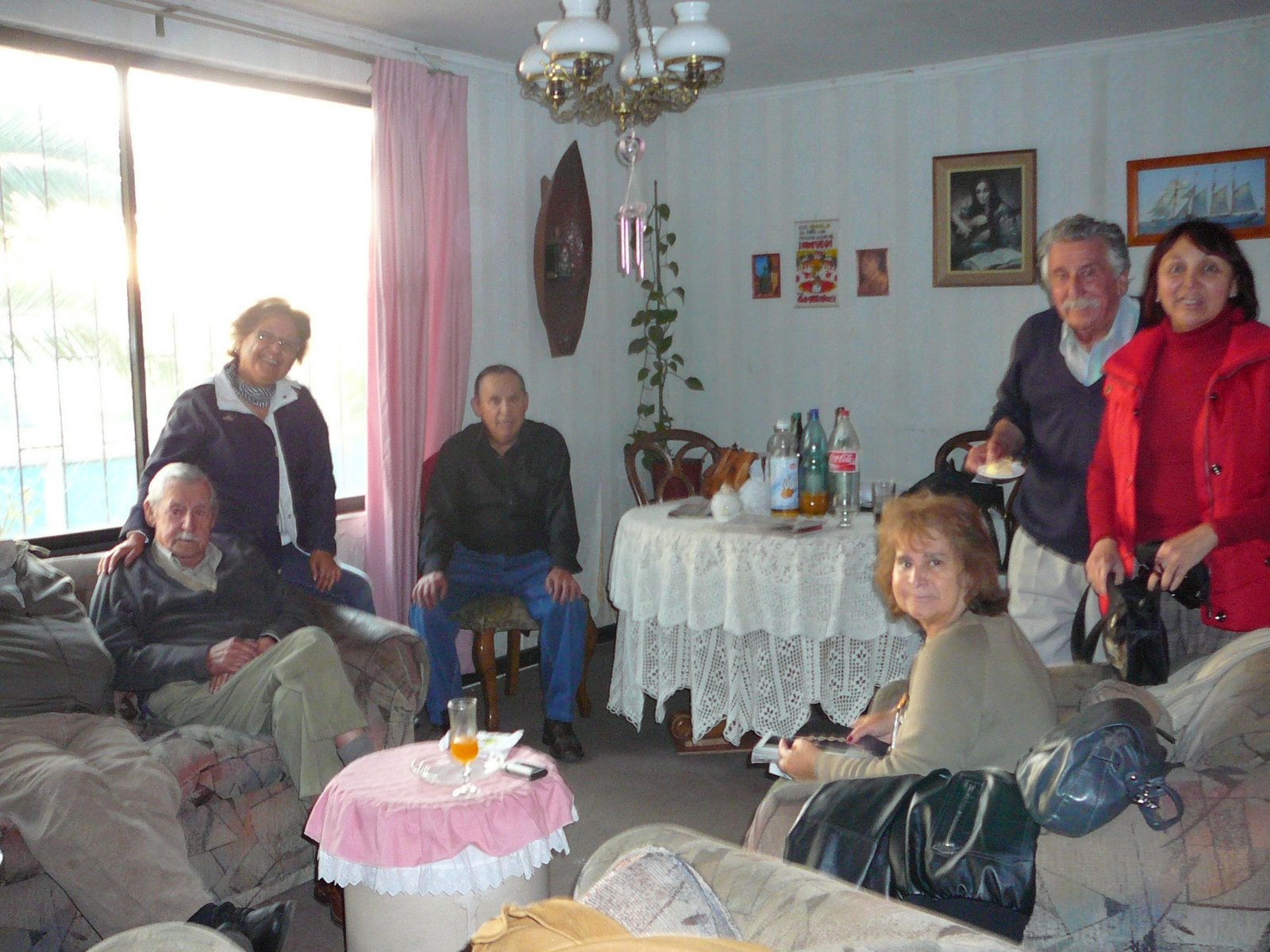 Sí, sí…starting on Good Friday, which is a national holiday in Chile, as pretty much everyone is Catholic, I spent lots of time in this house which belongs to Miguel, the cuñado (brother-in-law) of Freddy, my host father. He is standing next to my host mom, Rossy, who is dressed red. Seated next to her is Freddy’s sister-in-law and then across from her in the sofa is Freddy’s father and next to him, standing is his sister-in-law, and next to her in the black in his brother, and there are others who weren’t present for the picture. Don’t ask me their names, I’m just happy I can tell you their relation to Freddy.
Starting Thursday afternoon, almost everyone in Chile begins their vacation time for Semana Santa. I did not attend anything that day, but had the afternoon off of classes and heard music from the high school down the street while they had a procession before a service.
However, Friday is the big day here. Everyone was out and about and enjoying the day off and instead of suffering from fasting, we went to Miguel’s house, who used to own a restaurant in Reñaca, the town just north of Viña, and we had a huge lunch (I did refrain from breakfast, though!). On the way to Miguel’s we listened to classical music which I was told is the typical playlist of many stations during Good Friday. We drove about 20 minutes into the cerros (hills) east of Viña which are covered in houses. The cerros typically tend to be where the poorer population live. Here’s a descent picture of what the suburbios are like in the cerros. 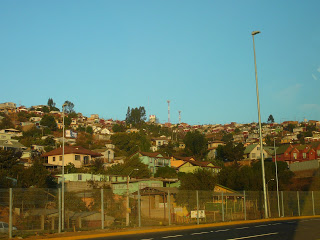 Miguel is a great cook and had all three day’s menus planned out perfectly. Friday we had an entrada of cold marisco (seafood) soup topped with onions and parsley followed by a hot marisco soup and of course we had bread and wine with it. Saturday consisted of a warm cream broth soup with scallops followed by fried fish and all kinds of salads, potatoe, tomatoe, onions, lettuce….etc. and Sunday was salad with half a tomatoe with scallops on top and mayonaise followed by paella, a typical Spanish dish that has yellow rice and tons of seafood and they also put sausage and pork, and after every meal we had ice cream and coffee or tea. Everything was exquisito!
All in all it was great fun to see inside another family’s house – I thoroughly enjoyed seeing the picture of Ché Guevara hanging on the wall as though they knew him personally, and the naked woman photograph that was randomly in the dining room – and getting to hang out with Freddy’s family who was really boisterous and liked to crack jokes. I was a little nervous the first day when we walked in to the room full of people and made my way around the room with introductions and giving the traditional kiss on the cheek while someone handed me a piscola (picso is the prefered Chilean alcohol and when its added with anything else, tropical fruit juice here, its called piscola). However, as the week went on I got to know them better and felt really comfortable and even understood some of their jokes!
When we were driving too and from their house to ours I got to see some other interesting traditions. 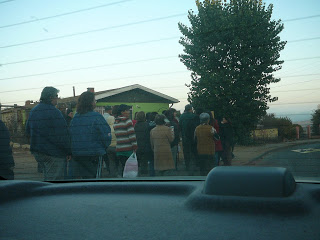 Here, a group of people were celebrating the Vía Cruz (Way of the cross) on Good Friday in the street. They put different points along the road so that the people climb the cerro. There were also kids asking for money in the streets to put inside the Judas. Here’s a picture I found on Google of one. 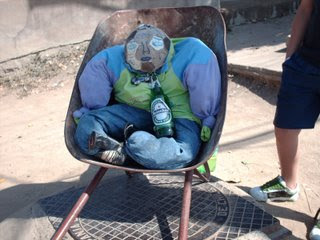 They make a stuffed man and put the coins that people give to them inside and then later they burn the hanging Judas Iscariot and all run to catch the coins (a bit creepy, was my thought…). Another neat tradition is that all the local, Chilean TV channels play religious movies and do interviews of scolars about Jesus’ life and death. All of this was really a great experience and it all culminated on Saturday night when I went to the vigil mass on the beach in Reñaca.

You see here how far away I was from the altar and there were still people behind me for this mass. Apparently the priest of this church, San Expedito, is known for really getting the parishioners involved in the mass, which too be honest, is a big task here, from my experiences at weekly mass.
Along the way to mass we bought candles and there was a huge bonfire to the left of the altar from which everyone lit their candles and it was really inspiring to see all of them lit! There were a couple of great moments in the mass. First, during the homily, the priest pointed out that the women were the first to receive the message that Christ was not in the tomb and he pointed out the importance of women in the Church and told us to applaud all the women in the congregation. My friend, Erin and I duly applauded one another. I would have to say that my favorite part of the mass was the Alleluia when we all raised our candles and the choir sang out Handle’s Alleluia! And I was really reveded up when the priest, who’s voice kept cracking from yelling into the mic so much, was reading (shouting) the gospel and said (yelled)
“¡Ha resusitado, no está aqui!”
“He is risen, he is not here!”
¡Feliz Pascua a todos!
Happy Easter to all!
Erika
April 13, 2009