Every time I travel, I’m amazed by the impact the US has on other countries, and I don’t mean politically or economically (I don’t really pay tons of attention to that stuff…yet…). What I’m refering to is the pop culture! Here’s an example: 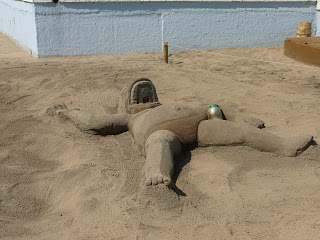 Homer Simpson immortalized in a sand sculpture, complete with a mini beer keg and in mid-burp, I’m assuming, knowing him… 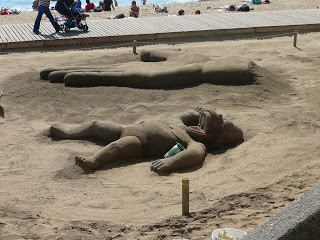 Unfortunely, the artist was unable to portray the wiggly lip movement that makes me laugh so hard when Homer burps on TV…alas…we can’t get everything…

I’ve also noticed that ALL the music here on the radio is American, but incidentally, its all the best music we have of the 70s, 80s, and 90s! They never place any of the crappy new music that’s all redone and you don’t really have to be a good singer to pull off. They’ve also adopted a lot of our words like “el mall”, “shopping” and “rentar”. Most of the movies are American and they usually have subtitles instead of dubbing them. I think this is because the dubbing is normally done in Spain Spanish and not Chilean and they don’t really like that accent so they just listen to the English and read the spanish. This is also the same with TV shows, although they don’t have the current seasons of any of them.

Although there are tons of American influences here they can’t seem to get over the shock of seeing gringos (north americans) in person. Every time I’m walking down the street, I’m very aware that I look different and they notice it and stare. I just keep walking but it is a weird feeling! Even though I get lots of stares, they’re definitely not hostile at all, on the contrary, they are very friendly and always help me out when I need directions or such.

Well, tomorrow starts the third week here and I’m well enough to head into the week and all the classes with excitement. I get to attend classes and see which ones interest me the most and then take those – what a nice system! So, I’m planning on taking grammar, history, literature and some other class that pertains to chilean life or culture. We’ll see how it goes!