Luckily, PUCV has Semana Novata, which means we had a week off of classes. Its a welcome week for all the Freshman, and therefore all of the afternoon classes are cancelled and many of the morning ones as well. So, Kate, Erin and Rachel, all friends of mine (all shown in this order), woke up early on Tuesday of Semana Novata and headed to Mendoza, Argentina which is about 7 hours away. 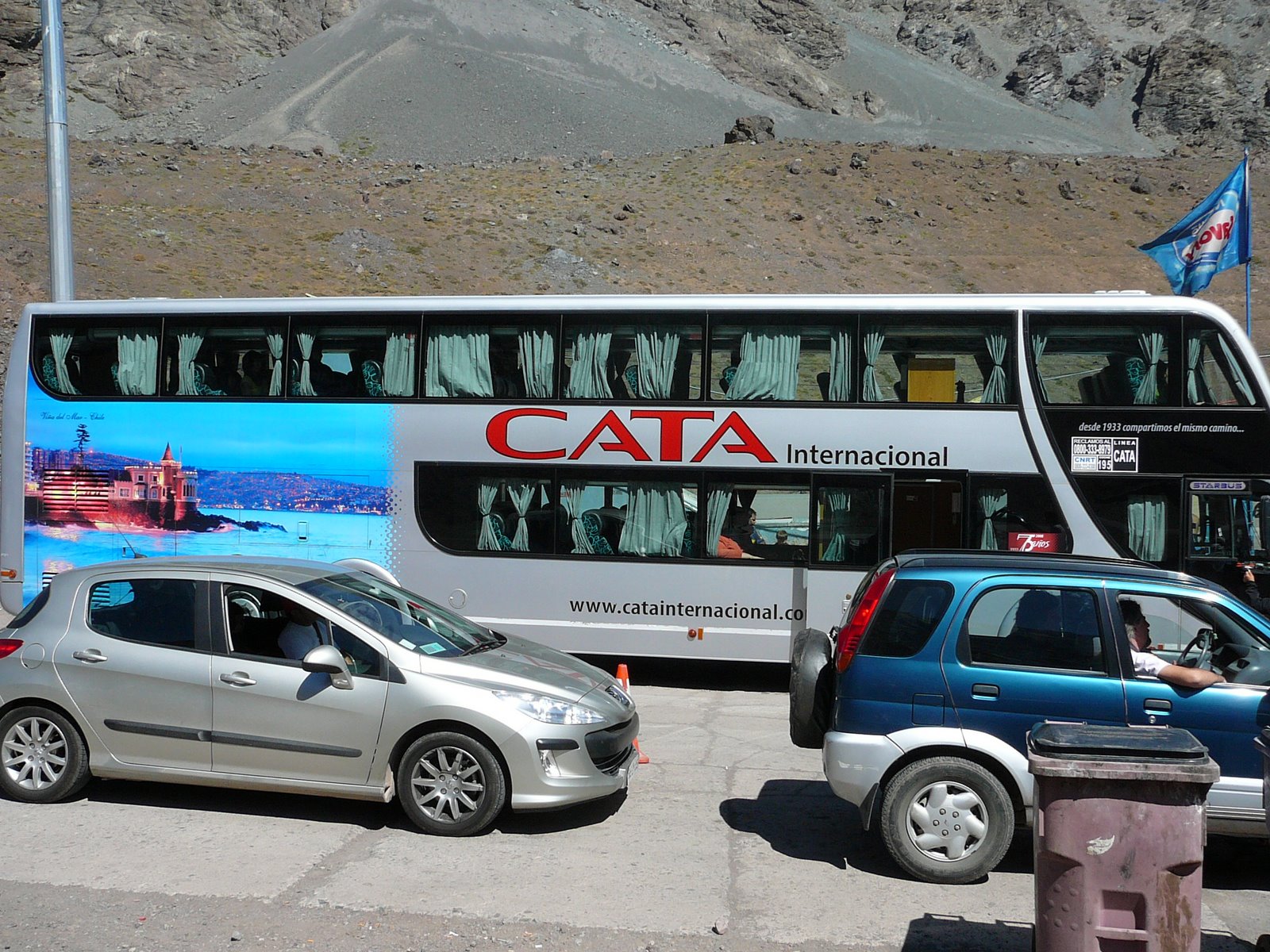 We rode on a double-decker bus which was really fun because the whole drive is full of beautiful views! Practically the whole trip is through the Andes, and coming from flat Indiana, it was really awe-inspiring to see the towering mountains. 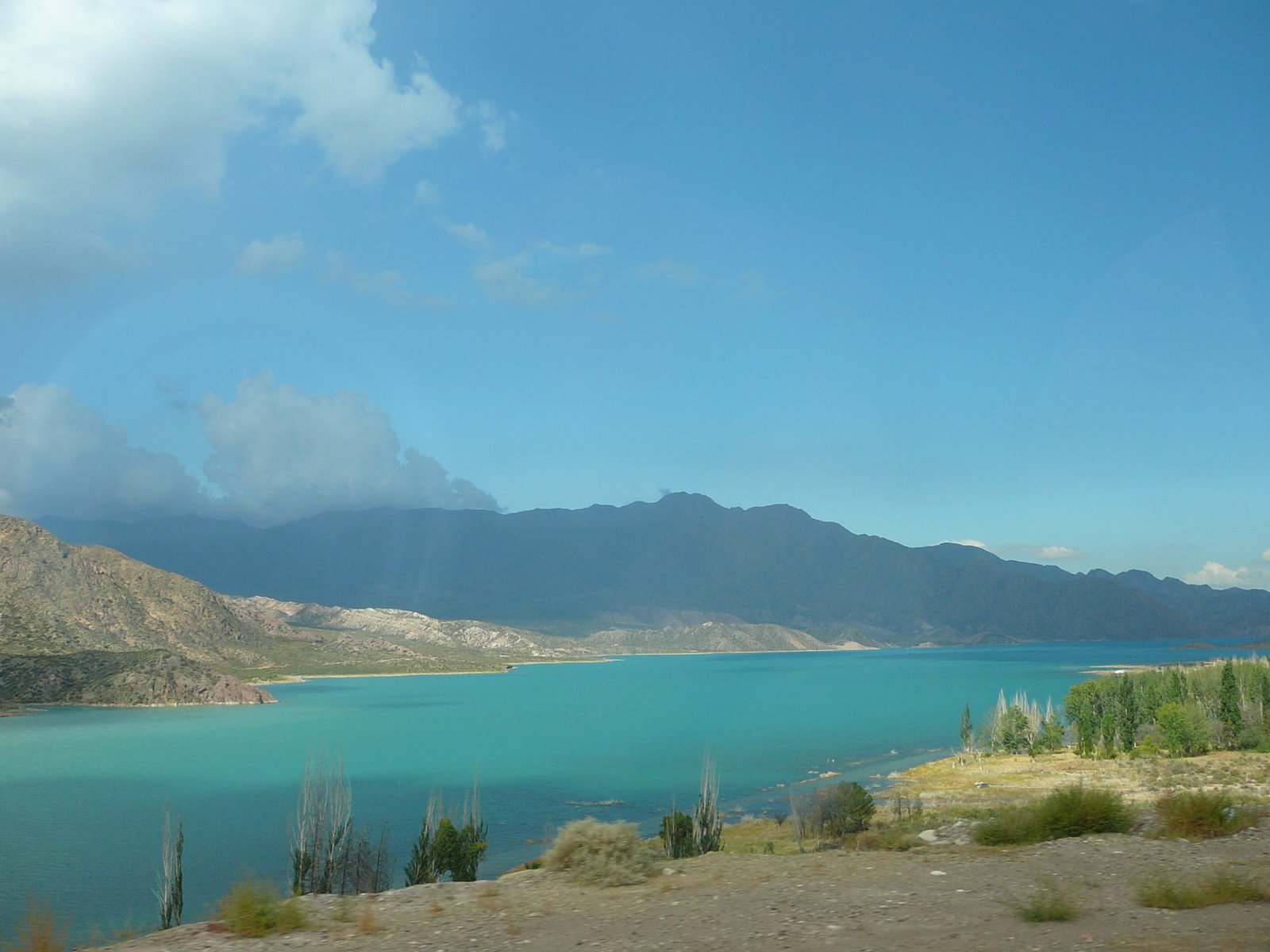 Here is one of the most beautiful views that I was able to capture through the window. If I’m not mistaken, I believe that this lake is actually there because it has been damned somewhere to capture the water from the Andes. Mendoza and much of the surrounding area is extremely dry and doesn’t receive much rainfall, so they need to collect the extra water so they can use it. 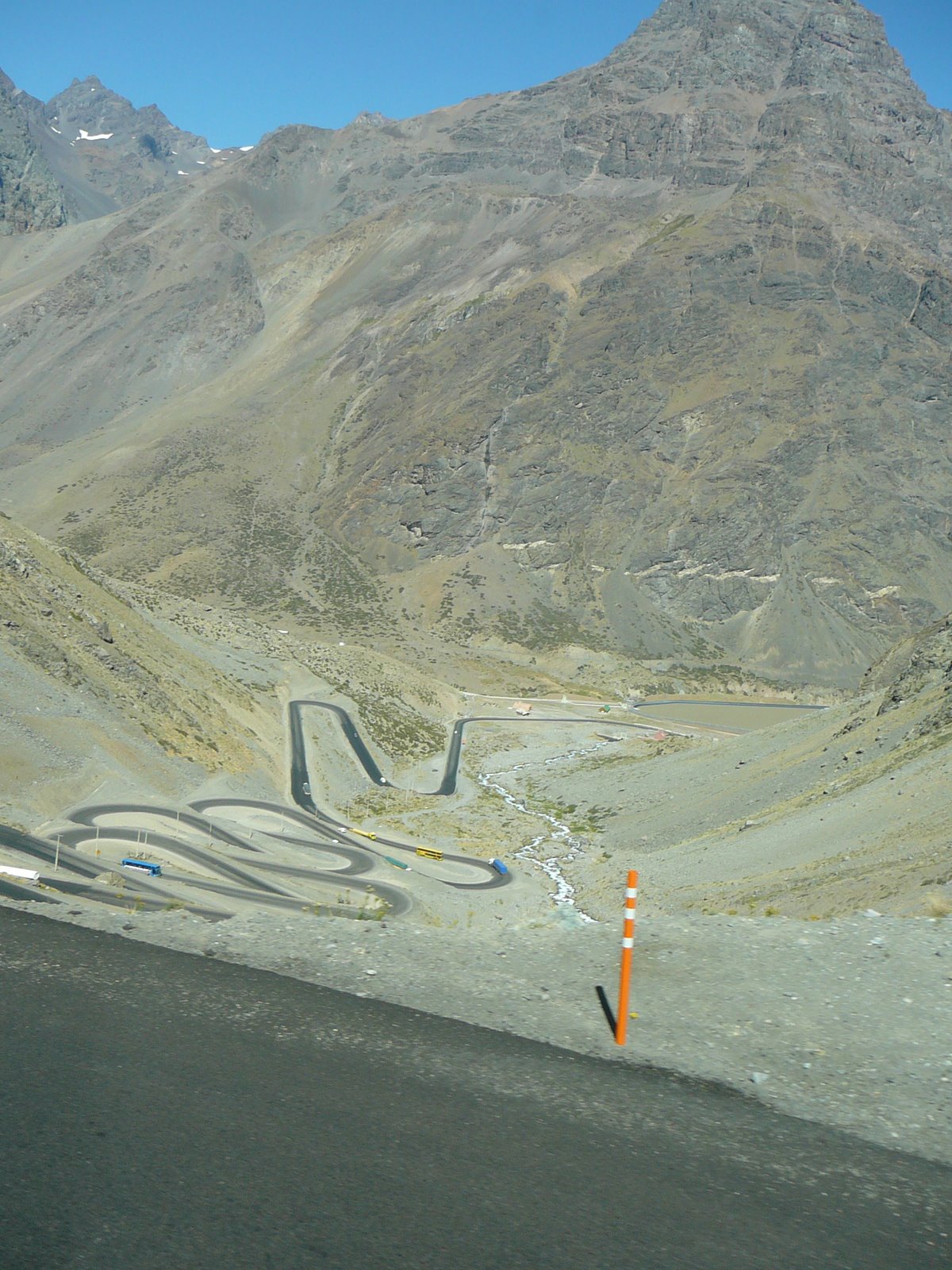 This was the harrowing part of the journey. As you can see, we slowly winded our way up the side of the mountain and it was a bit scarey to look down and see the bus was about a foot from the edge of this gigantic drop off….duly noted in this foto… 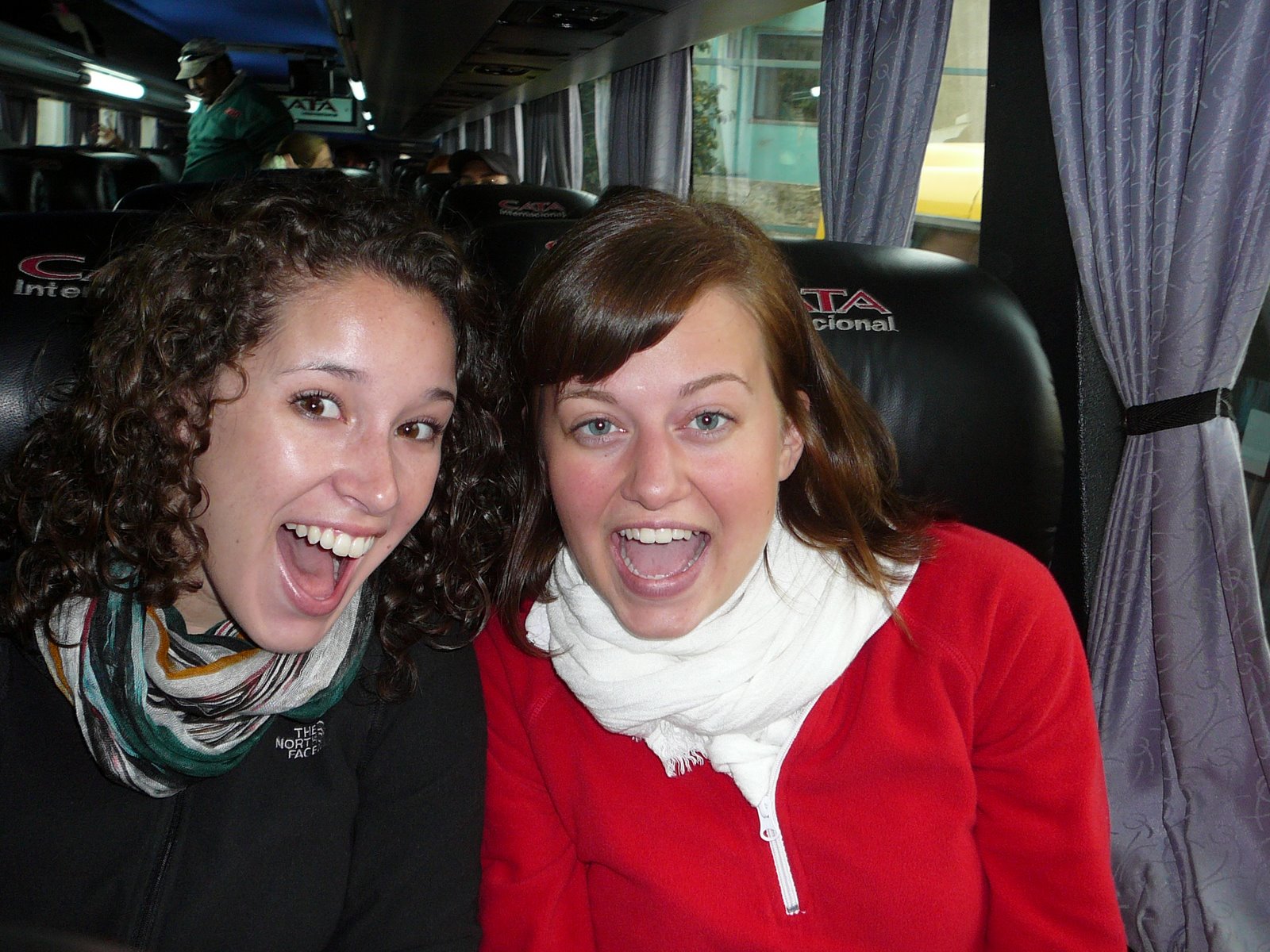 Here is our hostel, Puertas del Sol. The owner was a young Argentinian, Hernan, who lives in the hostel and was super kind and helped us book all of the activities we wanted to do in Mendoza. One night he even took us to go buy wine because it was raining. I thought I was going to die because of the way he drove his truck in the wet, slippery streets, but it was kind none-the-less. 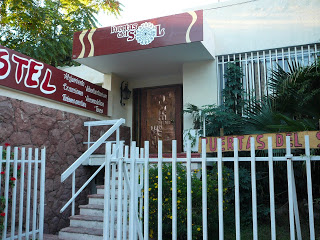 One day we took a wine tour through Maipú, which is sort of like a “county” of Mendoza, I believe. We rode bikes along the street and stopped off at the wine museum, did a tasting at Viña del Cerno (right), an artesinal winery that produces about 100,000 bottles a year, a chocolaterie, and a olive oil producer. 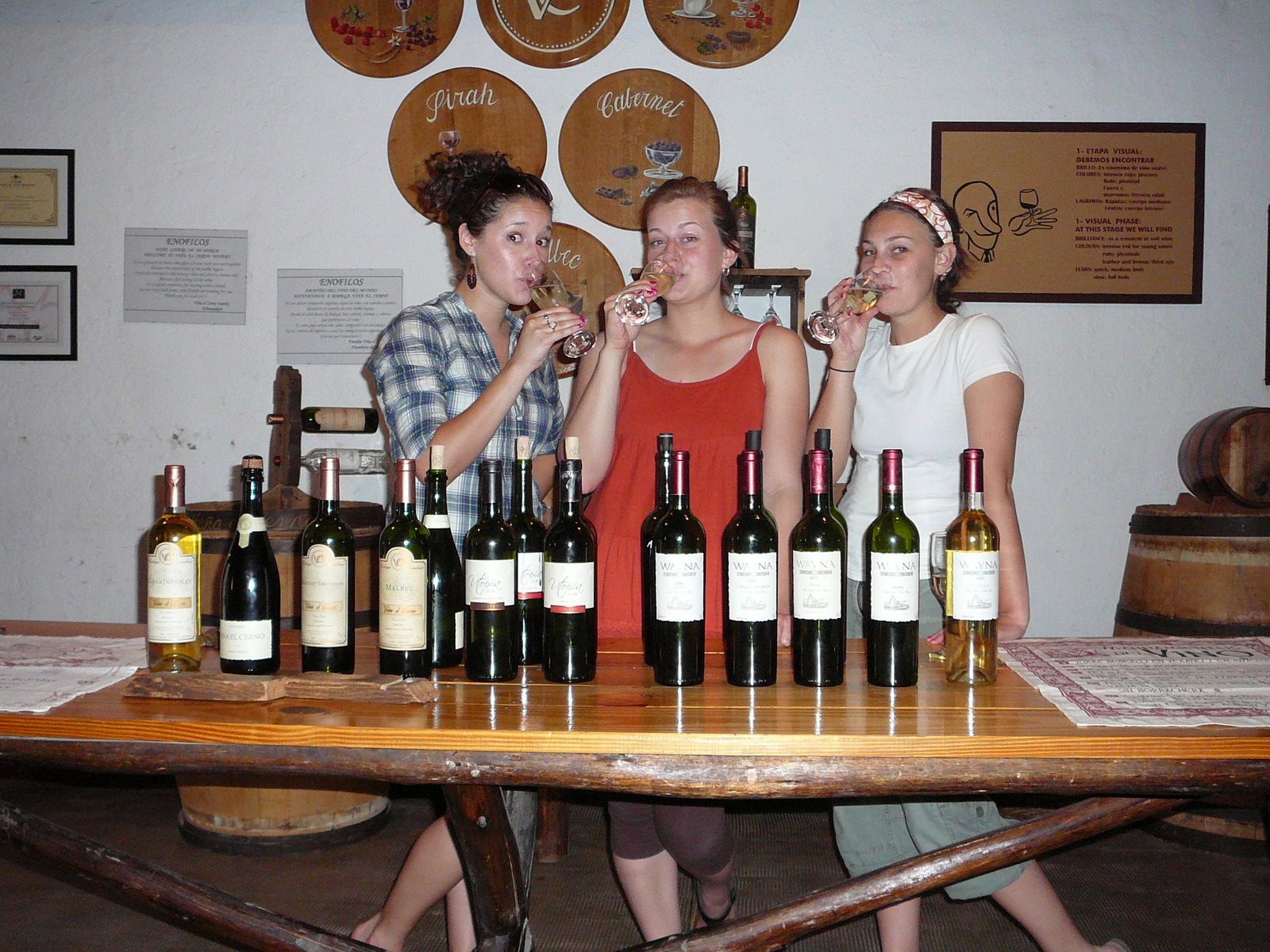 At the olive oil factory we were able to taste olives, olive oil on bread and olive oil on bread with sun dried tomatoes. It was delicious. Then at the chocolate factory we tasted chocolate liqueurs, I had Irish Cream and others we shared together were Chocolate, Chocolate with mint, with coffee and with banana. We also got to try four different kinds of chocolate that they make there which was probably my highlight of the day. Then at Vina del Cerno, we did a degustation and I tried a red wine that was a mix of old and new wine and then a dry champagne – both were excellent!

To the left is on top of Cerro de la Gloria, a “hill” in the massive Parque de San Martin. From here is obviously the beautiful view of the Andes and from the other side a great view of Mendoza. If you were to look to the right in the picture, just in front of the Andes, is where we took a horsebackriding excursion at sunset through the pampas. It was by far my favorite part of the trip with such a beautiful view of the Andes and then when we came back we had a traditional asado or BBQ with the gauchos (Argetinian cowboys) and it was the best beef I’ve ever tasted! 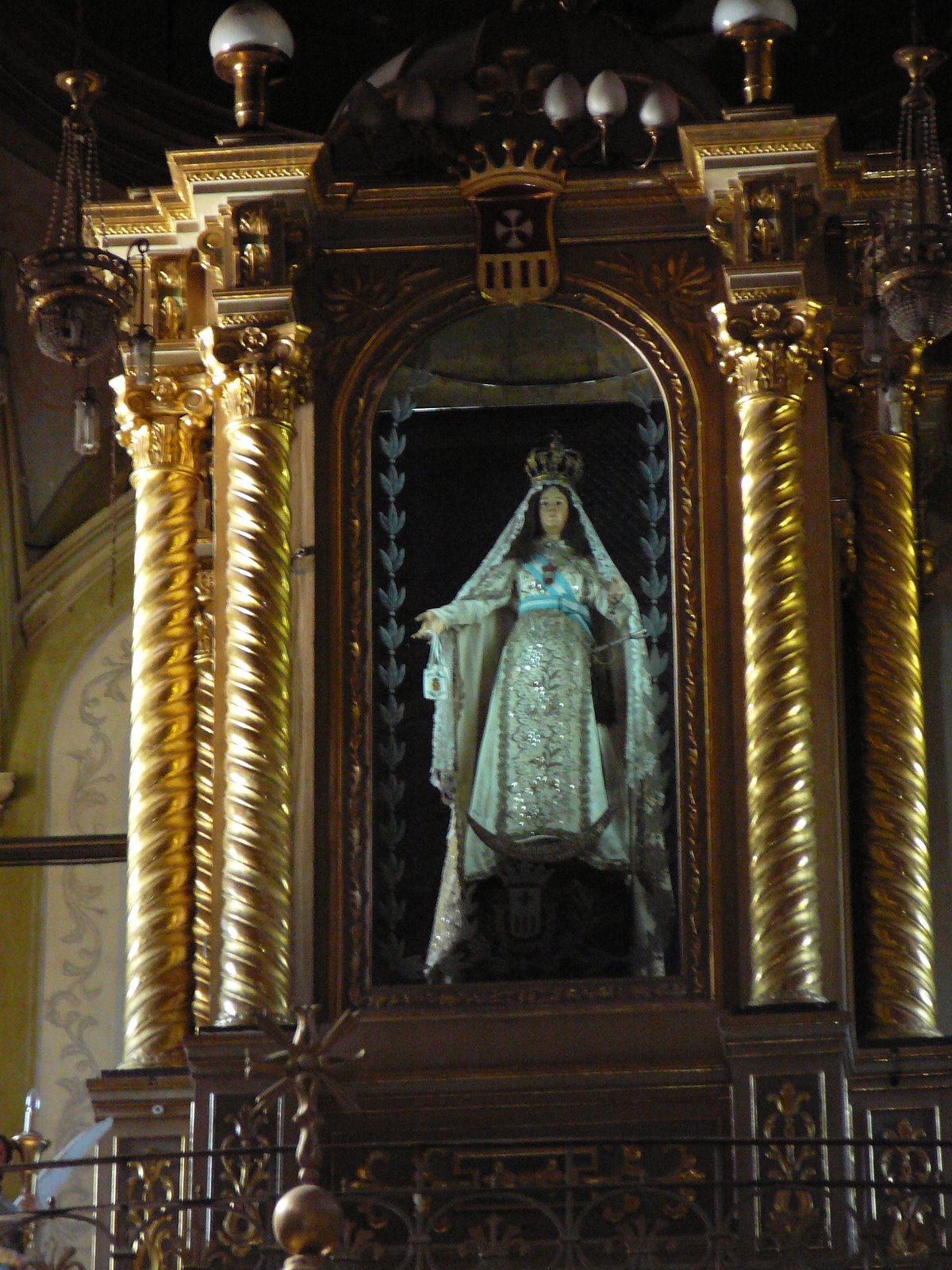 One day Erin and I were walking around saw this cool church that was being renovated so we stopped by and Gabriel popped his head out and asked us if we wanted a tour. We ended up getting a full-blown historical background tour of this church, Iglesia de la Virgen de la Merced. And this statue of the Virgin was found under the rubble of the church after an earthquake and she was fully intacted. Since then, the church has been rebuilt two other times because of earthquaks, hence the display case she’s now in. 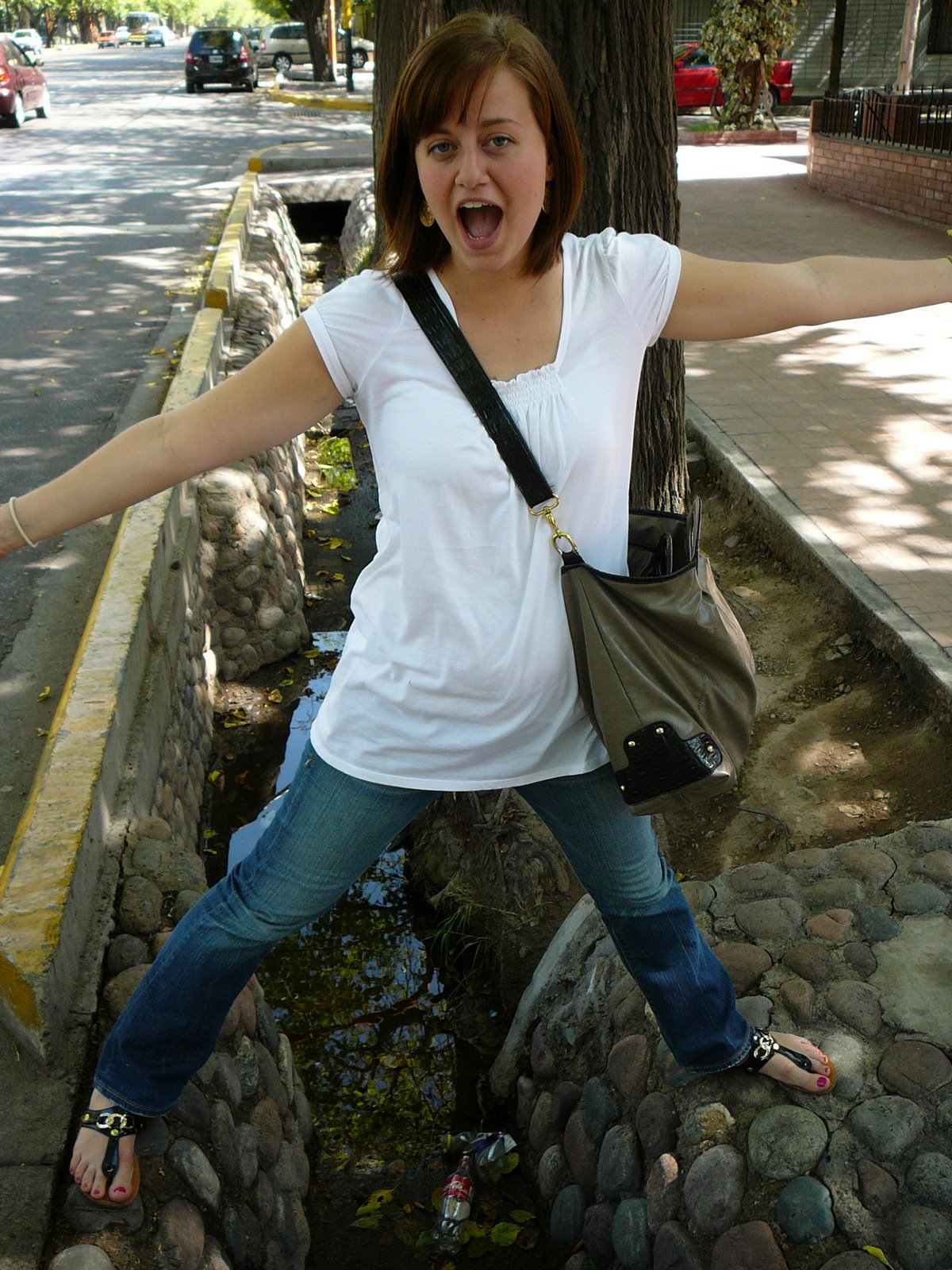 Mendoza doesn’t get much rainfall so after the earthquake that destroyed a lot of the city they made the sidewalks a lot larger – which means tons of wonderful spots for drinking a coffee or wine outside – and put in these little “ditches” along the streets that bring water from the Andes into the city…I think all of us almost fell in them at least once. 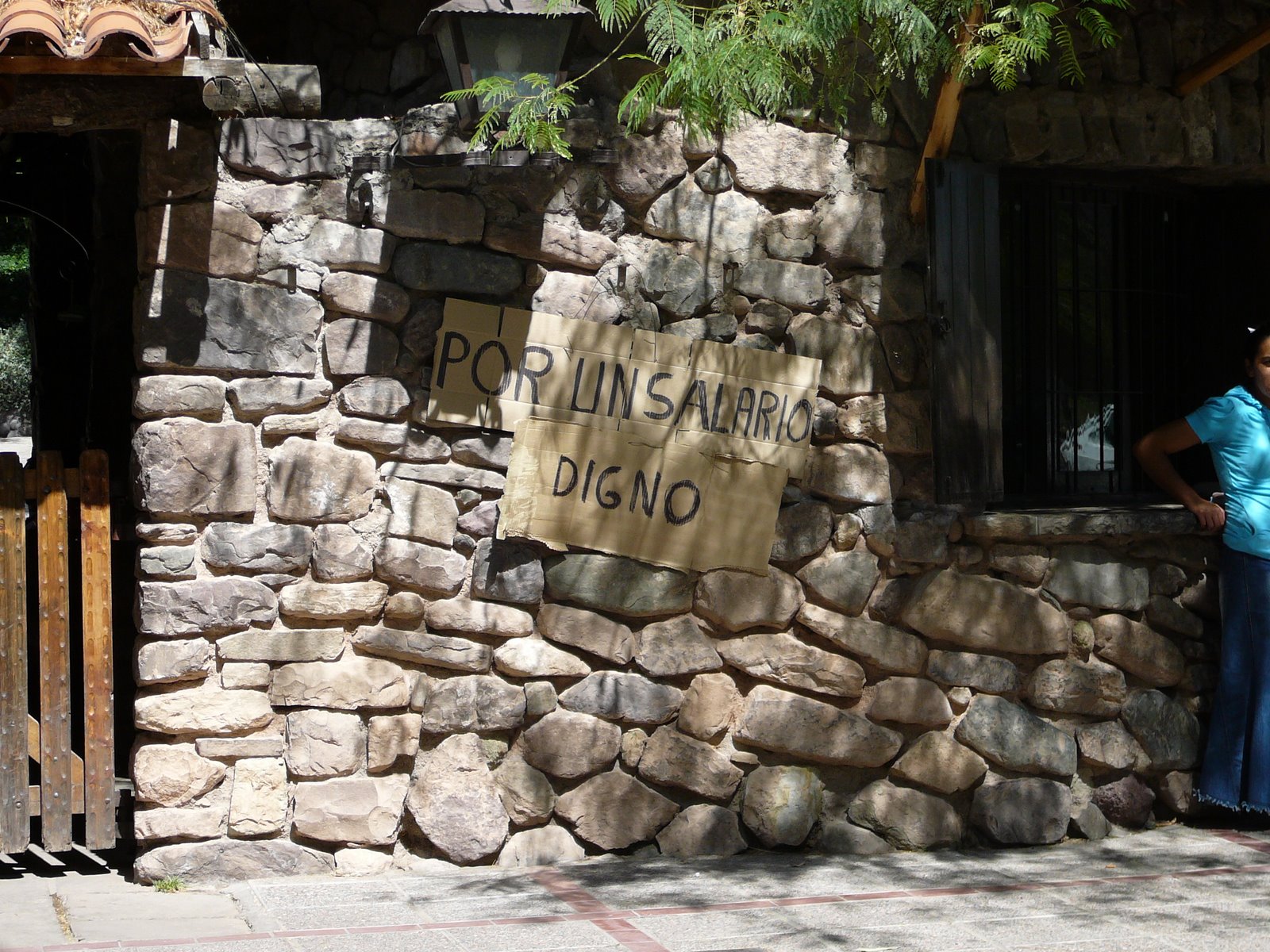 Our last day in Mendoza, Kate, Erin and I decided to go to the zoo. We waited about 30 minutes for a bus and then decided to take a cab…we we arrived this sign was up outside “Por un salario digno” – “For a dignified salary”. The workers were on strike…so we ate lunch and caught a bus back into town. 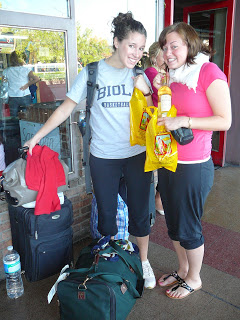 All in all, it was a great trip and the one souvenir that I got to take back with me with some leftover pesos, vino blanco!!!