Carrete is a word that one learns quickly here in Chile because it is de suma-importancia (very important) because it means FIESTA! And let me tell you fiestas abound here! The nightlife is super bien here because its lively, they have good music and everyone dances – chicos, chicas, viejas, viejos…TODOS (guys, girls, older people…EVERYONE!)! The music is amazing, and they play all the best of latin, american (especially the 80s) and reggae music. I’ve decided that this is why American bars are so boring because its hard to come by good music…anyway…

….here are a couple of photos from a birthday carrete for the girl pictured here in the white shirt, Sarah, who turned 21 last Friday. 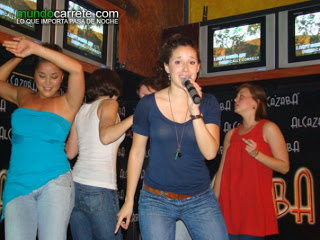 She decided on Karaoke (ka-r-a-o-ke in spanish) at a bar called Alcazaba. First of all the night here begins around 10:30-11pm for those who wish to get Happy Hour (don’t prononce the “h” if you want to say it in spanish) drinks which are usually 2 for 1 until midnight. Normally, the chileans go to someone’s house before heading out because it’s cheaper to drink beforehand than drink the majority of your beverages at the bar – this is called the “preparty” is the pre. Normally around 1-1:30am is when the party picks up and the people start dancing, in our case this is when the karoaking started. 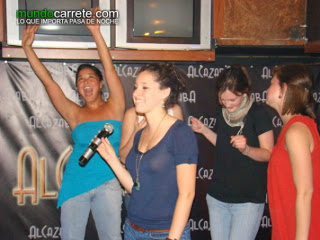 We quickly discovered that karoake in Chile is NOT like it is in the US where you go and laugh a lot at people singing stupid songs and are usually shocked into laughing again when someone actually sings well. Here in Chile, the people like to sing romantic songs and are actually pretty good at singing, and I guess they don’t really like to make fools of themselves. Well, we decided to have Erin, one of my friends from California, sing Shania Twain’s “Man, I feel like a woman.” Classic American girls night out song, right? 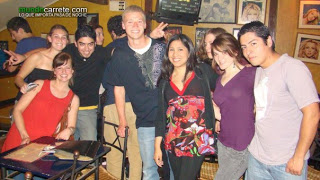 So, while Erin is sang, myself and the other girls danced and sang “back up.” The Chileans found this very amusing. And although only one of us was seriously hampered by a few too many piscos, the rest of us were very sober. However, I think that the Chileans assumed that we were all borrachas. Nevertheless, it was amusing and afterwards we found out that our pictures were taken and they put them on a site that has pictures from all the carretes around Chile (and of course you can pay to buy them.).

Hope you find them amusing, I did….ciao!